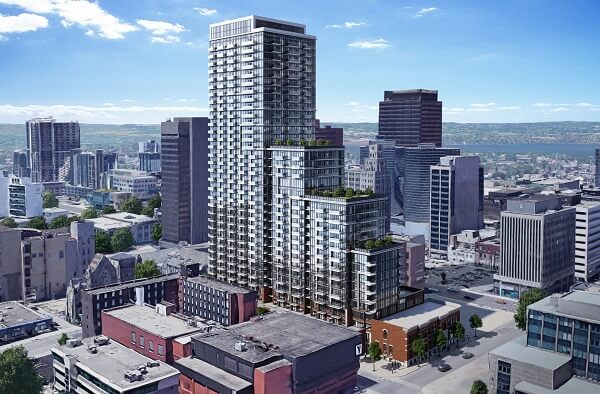 The Labourers’ International Union of North America (LIUNA) is pleased to announce the ground-breaking of a new residential development located at 75 James Street South, Hamilton, Ontario.

As part of LiUNA’s ongoing efforts to support and drive the revitalization of infrastructure and residential options in Hamilton’s downtown core, this new development is fully invested by the LiUNA Pension Fund of Central and Eastern Canada (LPFCEC) and is being built in partnership with Fengate Asset Management (Fengate), The Hi-Rise Group and SG Constructors.

The ground-breaking ceremony featured comments from Joseph Mancinelli, Chair of LPFCEC, LiUNA International Vice President and Regional Manager for Central and Eastern Canada, and His Worship Fred Eisenberger, Mayor of the City of Hamilton. Following the welcoming comments, Mr. Mancinelli and the Mayor participated in the ceremonial ground-breaking alongside LPFCEC trustees, city officials, and representatives of the project partners including Lou Serafini Jr., President and CEO, Fengate, and Jaime McKenna, Managing Director and Group Head, Fengate Real Estate.

“On behalf of LiUNA, we are incredibly proud to continue addressing the increasingly, critical residential needs in Hamilton,” said Joseph Mancinelli. “LiUNA’s footprint in our community continues to compliment the growth and future development of the city while addressing infrastructure needs including this new residential build with a fully funded investment by LPFCEC. The visionary 75 James St. South will continue to further economic growth and development including commercial, transit and residential infrastructure.”

Featuring 500 + residential units as well as office and heritage space, including the LiUNA Local 837 office, and live/work units, the 75 James Street South development will help to address significantly increased residential needs in Hamilton from people of all ages and occupations, including students, millennials priced out of the Toronto market, and retirees. The site location is exceptionally transit-oriented and pedestrian-friendly, offering easy access to necessities, work, school, and entertainment.

Amy-Fengate2021-10-28T15:58:35-04:00October 13, 2021|
This website uses cookies to provide you with more responsive and personalized service. By using this site you agree to our use of cookies. Please read our cookie notice for more information.Accept
Go to Top